We’re delighted to have worked closely with the Arezzo Film School in Tuscany, Italy recently, where we presented a programme of short films for the film students and invited guests at the film school and the Virginian Theatre in Arezzo.

We also gave a talk on festival programming and short film festivals in general, making a lot of new friends in the process! We’ll have a full report on our trip to Arezzo fairly soon as well as stills and images from their festival, we’re also excited that they were so impressed with the programme we brought with us that they have invited us back next year, when we’ll take over another batch of outstanding shorts!

We are also pleased to establish a partnership with CortoGlobo Festival, another Italian film and art festival based in Angri, Campania and we’re screening some shorts at the CortoGlobo Festival in April.  CortoGlobo is an arts event that combines film and conceptual and figurative art and we’re looking forward to hosting one or two of their short films at our events at Hidden Door at the end of May, again we’ll have more information about that fairly soon so watch this space! 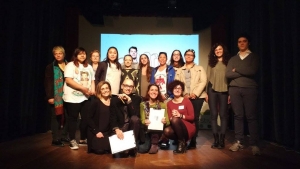