After an excruciatingly long day of 3 flights, 4 hours of delay and a lot of running around in airports we finally landed in Alghero, Sardinia, where we were met by our host, the very hospitable Sardinia Film Festival director, Carlo Dessi.
We landed at nearly midnight with a bagload of arthouse short film, and Carlo promptly whisked us off to the provincial capital Sassari – which was founded in the Roman era as a refuge from pirates, who regularly arrived off the coast intent on pillage and mayhem. Kind of like a classical-era 18-32 club – but without the Ambre Solaire and Paracetemols.

Little did we know that all the running around would lead to an incredibly nice weekend, then again you can’t really go wrong when you are in a place as beautiful as the island of Sardinia, with it’s vertiginous clifftops, Medieval Catalonian forts and disturbingly addictive ice-cream.
Sardinia and Scotland share surprising similarities, both being islands that are (currently) part of a larger country and yet have managed to maintain a very strong and distinctive cultural identity -the result of long and conflictive, yet interesting histories – and sheep, they both have sheep, loads of sheep. This made our experience there a lot more fascinating as we got lost in the alleyways and puzzling winding streets of Sassari – not unlike the ones in our beautiful Edinburgh- on our way to the film festival after long, hot, stressful days of wondering around medieval Sardinia, consuming enormous quantities of gelato.

Founded in 2006, it aims to promote and endorse the cinematic arts -particularly independent European filmmaking- to enhance the exchange of information and debate within the different artistic expressions, and encourage young people to look towards film as a form of artistic expression.

But the festival goes beyond the screenings. They also hold workshops, masterclasses, concerts, meetings and debates, as well as hosting a movie marketing room. Having the opportunity to share some of our selected shorts in this environment to some seriously cinephile audiences was an incredibly satisfying experience that we are very grateful for. 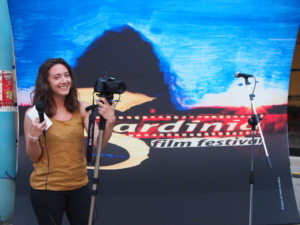 Not only did the friendly and sociable team behind the festival curate a great selection of shorts, but they were unbelievably welcoming even to the extent of taking us on a hurl to the beach!
If you’re not filled with envy by now -we wouldn’t blame you if you were- you can visit their You Tube channel sardiniafilmfestival or just go to this linkto learn more about the collaboration between these two festivals explained by Paul whose smattering of tourist Italian struggled to cope with the arthouse power interview led by our project co-ordinator Federica Pugliese,  luckily, they didn’t seem to mind his failure to correctly conjugate verbs, while his mangling of  perfect tenses only led to some smiles from the local journos!

And since you are already there look up and take part in the Sardinia Film Festival’s selfie contest. Selfies are great,
more so if there is a sheep in the background, especially a Sardinian sheep!