‘Rushes’ at the Manchester School of Art – Film Degree Show

A few weeks ago, we were approached by the Manchester School of Art to assist in programming their Film Degree Show.  We’re feeling very honoured and privileged to take part and of course we’re delighted to help out! It also gave us a sneak preview of some of the work coming out of the course and we are happy to report that we were very impressed with the vision and creativity on show, the future certainly bodes well for Mancunian film-making based on this year’s crop!

There’s thought-provoking, experimental music with a strong message (Coherence) there’s examples of brave film-making that takes viewers on an interesting dramatic journey (Soul) slice of life documentary with a feel for it’s subject (Down The Line), emotionally-charged and powerfully personal short doc (Watching It Back) and even space for an imaginative and well-directed sci fi with a memorable expressionist dream sequence (The Kick Inside).

If you’re down Manchester way over the next couple of weeks, drop by and see for yourself!

The show will be open to the public from Saturday 11 June until Wednesday 22 June 2016.
70 Oxford Street, Manchester 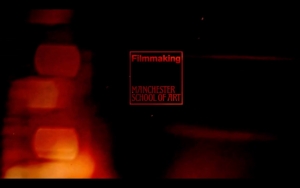