Highlights from 2013’s ESFF screened at the Hidden Door Festival

Last year’s ESFF included three open air screenings, six nights of British and International short film at venues across the city and an evening of short film roulette, deep underground in a basement in George Street. 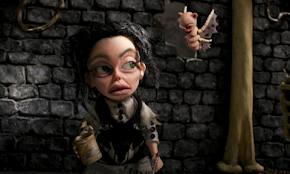 The highlights were plentiful; Oscar-qualifying short ‘Butterflies’ directed by Isabella Peppard and produced by Warwick Burton delighted audiences with its fabulously dark and imaginative animation exploring the harsher realities of pursuing a creative path. The edgy, Belgian psychodrama ‘Naïve’ was an edge-of-the-seat thriller with a psychotic premise, while Kate Sullivan’s award-winning documentary, ‘Walk Tall’ provided a life-affirming gem about a 91-year-old former Olympic gymnast with a penchant for forward rolls and correcting slouchy postures! Alexandre O Philippe’s JFK documentary, ‘The Spot’ provided a thought-provoking depiction of the place in Dallas where President Kennedy was assassinated, and the people who visit it.

The homegrown Scottish shorts showed the brilliant talent on our doorstep. Audiences loved the offbeat comedy ‘The Greyness of Autumn’ and Emma Dove’s wonderful short ‘On Another Note’ poetically captured a lady that makes (and plays) musical instruments of her own devising. ‘The Diver’ was another highlight, directed by the winner of the Student Academy Awards, Damon Mohl, this witty, beautiful and strangely haunting film cleverly portrays the fraught and intense life of a child’s toy.

For those who missed the festival last year, or want to catch the highlights again, we’ll be showing a selection of some of our favourite shorts from 2013 as part of the Hidden Door Festival this year. Look out for us in the eerie vaults of Market Street on Friday the 4th April, where we’ll be showcasing some top-notch film from 8pm onwards.