The Edinburgh Short Film Festival opens again on October 26th and will once again screen superlative short films across the city this Autumn!

It’s great  to see that some very good comedies have made it onto the programme this year and we’re always pleased to  light the mood on those dark November nights! From Spain, we are happy to screen romantic comedy, APOLO 81 by Óscar Bernàce A brilliantly imaginative, and perfectly executed, romantic comedy with a cast and director that deftly weave romantic inclinations and comedy timing. The film was screened at the Palm Springs Shortfest, the Bilbao Fantasy Film Festival and won Best Short at the Festival of Spanish Cinema in Nantes  … No risk, no love!

A SIX AND TWO THREES by Andy Berriman won Best Comedy at the Sunderland Short Film Festival as well as the Audience Award at the Plymouth Film Festival and we’re pleased to be the Scottish premiere. The film features a couple of standout comic performances by a young cast, as two boys from different sides of  the tracks meet when one goes in search of his father. Over the course of the day they realise they might have more in common than they think.

NACHSPIEL (AFTERMATH) by Ralf Beyerle is another witty romantic comedy with some nonchalantly comic acting, well-drawn characters and sparky dialogue and won Best Comedy at the Beeston Film Festival last year.
When you wake up in a strange bed the morning after a party, you find that it’s often the small things that raise the questions of greatest importance.

A film about the time between yesterday and today.

BRUAR by Graham Cassalls packs a lot of humour into it’s 90 second running time! A doorstop named Bruar is fed up with the lack of manners in today’s society and decides that it’s time to act by confronting an unsuspecting victim, Dave, to teach him a rather polite lesson.

Winner of Best Editing at the First Act Film Festival

A black comedy about a Californian geek, played by the inimitable Mac Macdonald (of Red Dwarf fame) in search of his horror hero Boris Karloff. Brilliantly funny and also deliciously dark.

L’ULTIMO VIAGGIO (THE LAST TRIP) by Valeria Luchetti is a slightly offbeat but charming and genuinely funny award-winning Italian comedy.  A Father and son traveling by car to work through the Lombard plain when a bizarre encounter forces them to confront superstition. Winner of Best Film at the Infinity Film Festival, Milan.

Surreal comedy THE LICK by Stephen C Horne is imaginative and funny and very Scottish! One day inside a mysterious graveyard, footballer-wannabe Kris discovers the seduction of dreams…

IMITATIONS by Fabian Velasco & Milos Mitrovic from Canada, is both funny and shockingly horrific.

After getting plastic surgery to look like a famous teen popstar, an introverted super fan named Arnold begins to experience irreversible side effects as his face begins to fall apart during a night out doing karaoke.

A witty and decidedly dark sci fi comedy horror with shades of Zoolander.

MADAM BLACK  is yet another multi-award winning comedy this time from New Zealand. A deliciously dark comedy which makes novel use for a dead cat. On the way home from a job for his glamour portrait company ‘Hotbods’, Marcus, runs over a cat. He discovers its young owner, Tilly, searching for it on the front lawn outside her house…

Two pig farmers debate on their techniques. A group of piglets, passionate about art films, watch oeuvres on the screen of an iPad. An unexpected visit from the police. A psychedelic flight on the wild landscapes of Sardinia.

THE BATHTUB by Tim Ellrich is a delightful and unexpectedly war comedy from Austria:
One Bathtub – three Brothers – many Splashes! Three brothers try to dive back into their childhood through an old family picture. Winner of the Special Jury Prize at Clermont-Ferrand. 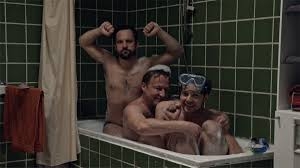 Life is short so it’s just as well our films are as well!