In tribes we trust. Is there logic to our social selections? Our communities protect us, but sometimes we find ourselves cast out in the cold.  How do we react when we become outsiders?

From Best British Short at the London Short Film Festival to darkly humane Afghan documentary and from the Audience Award winner at Clermont-Ferrand to a European Premiere drama from the Reunion Isle, as well as the Grand Prix winner at the Brussels Short Film Festival;  we present an
award-winning selection of short film with an outsider view of human life.

We’re delighted to be sharing our opening day across Scotland to our friends at Screen Argyle
with our first satellite event for 2018, on the beautiful Isle of Tiree, at the An Talla centre. on our opening night!

We’ll be screening a mix of some of our favourite short films ranging from our Rising Star award winner Alia Ghafar’s bittersweet
Scottish drama, Salt & Sauce and Robin Joseph’s Oscar-nominated animation Fox & The Whale.
We screened there last year and looking forward to entertaining the isle again this year!

OUT OF THE ASHES

A flick of a cigarette – moments of disaster can bring about a breath of calm and usher in positive change. Humankind’s capacity for rising Phoenix-like from the flames is seemingly boundless. What doesn’t kill us…

With films ranging from Belgian comedy and Clermont-Ferrand winning New Zealand Drama, Turkish animation and Jury Prize winner at Annecy, alongside Scottish, Italian, US and Chinese shorts in a packed programme of films from the ashes!

Edinburgh Short Film Festival presents Linden Space.  A collection of animated films made by the students of Priit Pärn, a world famous Estonian cartoonist and animation director.
The programme is curated by Peter Murmaa of the Estonian Short Film Centre and presents the outstanding and award-winning work of a new generation of Estonian animators; who carry on their master’s teachings in their own unique way.

Visual Effects Workshop, led by experienced VFX expert, Dan Cullen. The aim of the workshop is to show how practical skills in VFX packages – many of them compatible with ordinary laptops – can create realistic environments which may be too expensive, impractical or time consuming to capture on film and can help to cut costs for film-makers.
Dan graduated in Digital Post-Production from NFTS and is currently working at Smoke & Mirrors as a commerical artist and compositor.
Dan’s previous credits include the Foster’s Beer ads and the feature film ‘Black 47’.

In this dark, dark house, can you blindly stumble free when there is no path for you to follow?
In these dark, dark woods, can you forge a home in the pitch-black night? A series of films exploring how we try to find our way amid darkness.
From the audience award winner at Cannes 2018 to Colombian animation by Emmy-winning animators, and from South Korean neo-noir to Scottish neo-realist poetry, we’ll try to find out if there is a way home!

CURSE OF THE WEREDUCK       Stuart Hubbard 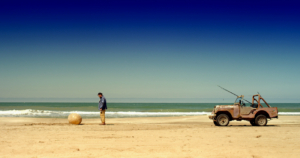 First impressions can be flawed. It takes time to get to know someone, and occasionally help comes to us from an unexpected place.
The hidden facets of the people around us are revealed, sometimes in our favour and sometimes with unforeseen results!

A look at allies and enemies, helpers and adversaries through short films including winner of Best film at SXSW and Grand Jury winner at Sundance. There’s Argentinian Sci-Fi and Rhode Island Film Festival Grand Jury award winner, as well as outstanding Finnish and Afghan drama,
award-winning Scottish horror and even Lebanese comedy!

We’re very pleased to be working with Eden Court Theatre this year to present a programme of outstanding short films
to audiences in Inverness for the first time!
As the city’s leading arts venue, it’s wonderful to have a programme of international, Scottish and UK Award-winning
short films screening in the Highlands, at Eden Court.

THE GAMES WE PLAY

Human culture is endlessly playful and immersed in trickster traditions, and playtime takes on a myriad of forms.
From Peruvian Black Comedy to award winning Swiss and Canadian animation as well as the Jury Award Winner at Sundance, we explore Games and Play in all its manifestations.

The Edinburgh Short Film Festival presents Mexican shorts courtesy of IMCINE, the Mexican Institute of Cinematography.
A curated programme of award-winning and eclectic shorts ranging from animation to drama and documentary. This mixed sample represents an exploration of Mexican culture, sometimes celebrating it and sometimes condemning the country’s devastating reality.  But in each case, IMCINE showcases the wide range of talent and artistry Mexican contemporary film has to offer.

What happens when we observe time? What do we learn and how does our observations change when we speed it up or slow it down? And how exactly do we do that?

In this event, hosted by Edinburgh International Science Festival, timelapse photography pioneer Walid Salhab will be in conversation with documentary filmmaker Amanda Rogers, sharing his innovative techniques in creating groundbreaking timelapse videos and screening his films that offer a spectacular view on Scotland and our world.

Whether you’re an enthusiastic photographer/filmmaker or just curious about the timelapse function on your smartphone, come along for a glimpse of the craft behind the creation. Pick up some tips on making your own timelapse videos, we’ll share your creations on our website and social media!

WHAT THE FUTURE HOLDS

Our minds are haunted by thoughts on that which is yet to come. How do we find comfort in the present and look towards the future with curiosity?
Presenting short films that explore this theme from Tribeca Best Animation-winning Irish animation and award winning drama from Germany and Guadaloupe, as well as the winner of Mecal Barcelona audience award and astonishingly realised war drama from the USA.