10 OF THE BEST:THE BEST 10 SHORTS SCREENED AT THE EDINBURGH SHORT FILM FESTIVAL

THE BEST 10 SHORTS SCREENED AT THE EDINBURGH SHORT FILM FESTIVAL

Launched in 2011, by a group of film-makers, the Edinburgh Short Film Festival has screened 323 short films in 5 years, creating an eclectic programme ranging from Edinburgh-made community shorts to Oscar winning films. In no particular order, we’ve compiled a list here of some of the Festival’s favourite films over the last few years and some directors to look out for in the coming years..

Screened in 2013, Butterflies directed by Isobel Peppard and Oscar Qualifying, is a claymotion, steam-punk fairy-tale that follows a young girl who, dreaming of becoming an artist, accepts a job drawing greeting cards in a dingy, underground factory, watched over by a sinister capitalist.

She is accompanied by 3 strange, moth-like insect with breasts, figures that represents her dreams. The forced labour deep in the bowels of the factory, threatens her hopes and the life of her companions.

The film is an outstanding example of animation created with vision and won best animation at the Sydney Film Festival before being screened at the Edinburgh Short Film Festival.

Roger the Real Life Superhero, made in England by New Zeleanders Cathy MacDonald (director) and Felicty Monk (Co-Producer),  first screened at the ESFF in 2012 and tells the story of 19 year old Roger Heyhurst, who lives on an estate in Salford, Manchester. With the support of his mum Jennifer, Roger dresses in a spandex suit and cape, adopts the superhero persona of ‘Night Warrior’ and patrols the streets at night, handing out food packages to the homeless. His unorthodox approach to community service is increasingly attracting attention – not all of it welcome!

Alan Holly’s imaginative re-interpretation of the ‘Everyman meets Death trope’ takes a lyrical and poetic approach to the story of a drunken inhabitant of an un-named Irish town, who, following a car accident late one night, encounters the cowled figure of Death in the local park.

Since the protaganist refuses to accept his fate, Death takes him on a surreal, beautifully-drawn journey in which the hero learns acceptance. Combining philosophical themes with 2D animation that floats and swoops across the screen like it’s ethereal nemesis and accompanied with a haunting piano score, the film evokes a powerful mood and a thought-provoking solemnity.

Screened at the 2014 ESFF, the film was Oscar nominated in 2015 and has gone on to be screened at over 30 film festivals as well as picking up 22 awards including the Most Creative Short at the Edinburgh Short Film Festival.

‘Dark Net’ features a brilliantly manic performance by Johnny Vegas, who plays an irresponsible Northern loser in Adam Woodhall’s brilliant comedy noir. The ending pays homage to the revered British cult crime thriller Get Carter and its grimy Northern roots are also evident in the back streets and decaying, somewhat decrepit clubs and bars, populated by lonely men who resort to using the dark side of the internet to resolve their issues.

While being very, very funny it also has a noir-esque edge, yet the hard boiled exterior is softened by a sharp and blackly comic wit, a terrific central performance and some unquely Northern locations.

A charming and life-affirming documentary following the relationship between two octagenerians living in East Kilbride in Scotland and their carefree, happy and durable friendship.

Chrissy was a sickly child, so no one expected her to live to a ripe old age. Nevertheless, this Scottish woman is now 95, frail but full of life. From her retirement home she engages in activities that keep her active, fun and bursting with vitality and humour. Today, Chrissy’s 91-year-old boyfriend Bill is coming over for the evening. A simple idea, beautifully told with an unobtrusive camera that allows it’s subjects the space to come to life.

Shades of ‘Lost’ in this twisted, surreal German horror by experienced director Detsky Graffam. An arrogant businessman, late for a meeting, is lost in a forest after his car breaks down. He comes across a lonely traffic island in the middle of the forest and so begins a terrifying ordeal on what must be cinema’s deadliest traffic island. You’ll never look at pedestrian lights the same way again! The mise-en-scene is highly impressive with the action of the film taking place over a year. The director ratchets up the tension as the protaganists face a daily battle for survival while they attempt to outwit their unseen opponent. Detsky said he wanted the film to feel like a Grimm Brothers fairy tale, and he certainly delivers on that in this superb short which screened at the 2015 Edinburgh Short Film Festival and has now been selected for Cannes 2016.

A comic book obsessive creates a sociopathic, female super-villain who confronts and undermines authority. Polly uses pink body cream to fashion pistols and cuts the air with her knife whilst longing for an opponant worthy enough to fight against.. but there’s just one little thing holding up her plans.

A freewheeling, anarchic slice of moviola, that defies a pat description and was nominated for the Scottish Short Film Award at the Glasgow Film Festival in 2014.

There is a distinctly 1960’s Boulting Brothers/Ealing Studios retro feel to this romantic comedy, filmed in the period mews and cobbled lanes of Edinburgh’s New Town and featuring a sexually-charged baker’s pantry where the flour and icing is put to somewhat spicier use than normal!

A repressed spinster falls for the local Lothario in the shape of the hunky baker along the lane..how can she overcome her inhibitions to reveal her true feelings?

Directed by Eleanor Yule and produced by an all-female team, Love Cake was also screened at Aesthetica and was one of the Edinburgh shorts we selected for the Trinidad & Tobago Film Festival last year.

By turns quirky, elegiac and witty, Samantha Dinning’s indie-influenced tale is never short of surprises. The film’s colourfully bright, sunny look and its elegant composition is at odds with the dark, internalised turmoil of the lead character – played with a lonely grace by Ella Speedie– whose inability to conform in a world of cruelty, leads her to make ever-increasingly elaborate plans for her own demise – sketched out Heath-Robinson style in her high school maths jotter. The director skilfully traces her isolation from her peers, while every day on her way to school, she passes a dangerous looking Sinkhole..

A taut, spare and engrossing thriller, Scorsese-esque in its use of music and an absorbing exploration of two characters – both magnificently played – Contrapelo grips and ratchets up the tension with each scene.

A barber in a small town in Mexico is kidnapped to shave the murderous boss of a drug cartel and as he does so, he faces an increasingly urgent moral dilemma, whether to kill the ‘capo’ or not, while he lies under the towel, neck raised to meet the razor…Oscar qualifying, the short is a perfectly paced and never less than gripping.

That’s 10 but we couldn’t resist squeezing one more so as per ‘Spinal Tap’, the dial on this article goes all the way up to 11..

HE AND SHE – Marco Gadge (Germany)

Marco Gadge’s freewheeling heroine, Annemarie, is a 70’s-something oddball who engages loser-in-love Thomas with a life-lessons at a remote motorway service station.

The film is a deftly-executed road movie with some wonderful characters and at it’s heart, an unlikely couple. The film also features a hugely impressive opening sequence, as Thomas’s campervan,( laden with all his wordly posessions, including an outsize fluffy mouse strapped to a sofa) makes it’s way erratically along the autobahn, as he learns his girlfriend has dumped him.

The film originally screened at the Palm Springs Shortfest and was shown at the 2015 ESFF. 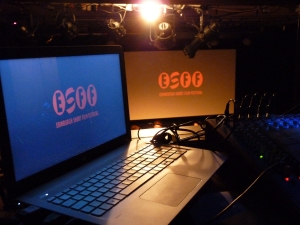